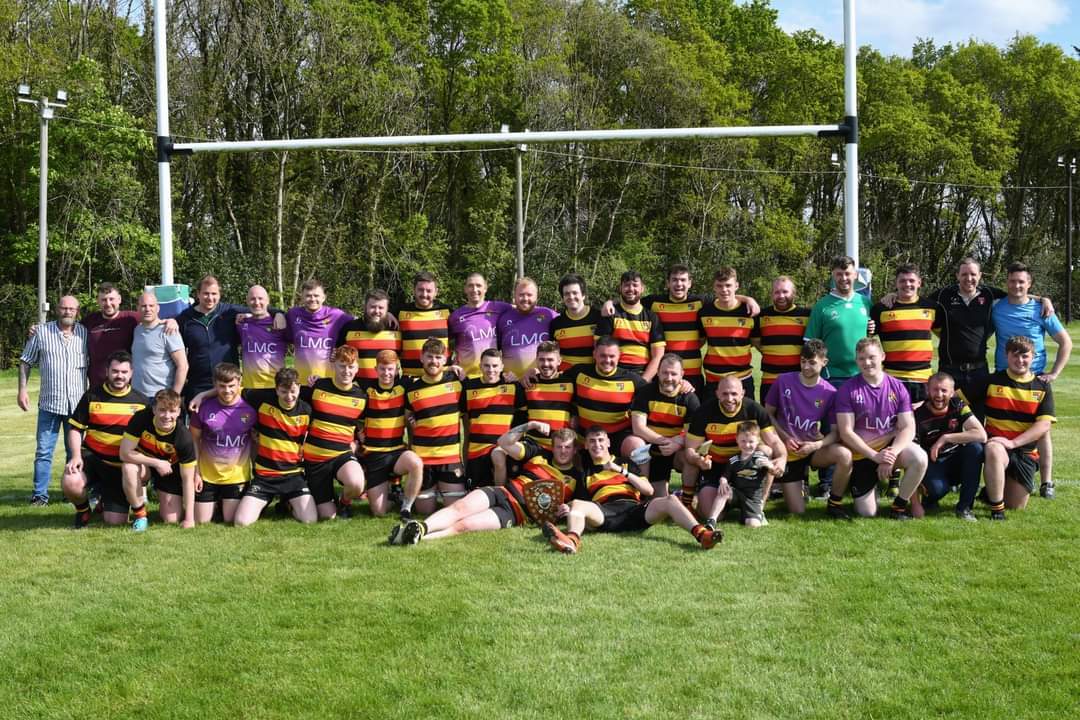 North Meath Athboy celebrated the first silverware of the season on Sunday with a resounding win over Carlow in the J2 Provincial Towns plate final.

There was a combative start to the game with some off the ball hits and high tackles and a Carlow player was sent to the bin in the opening minutes. Full-back and All Ireland winning Meath Minor winner Oisin McDermott slotted over the resultant penalty to give North Meath the lead.

Carlow found themselves well behind in the penalty count as well as the scoreboard and no sooner had one player returned from the sin-bin, when the referee issued another yellow card. And Oisin McDermott made sure with the penalty kick to put North Meath Athboy up by six.

Both teams were clearly determined to finish their season with a win but it was the home team that scored the first try. Scrum half Nathan Kiernan made a break from a scrum and found himself one on one with the full back. The ball was moved wide and Oisin McDermott finished off a fine move in the corner to make it 11-0.

Carlow came out hard in the second half but were met with some fierce tackling from the home team. The two flankers – Senan McDermott and Cailum Kiernan - were especially prominent in defence.

The visitor’s pressure eventually told when they kicked a penalty to make it 11-3. While the momentum was with the visitors, luck was not.

Firstly the Carlow full-back sliced through the North Meath Athboy defence, comfortably won a chip and chase but then dropped the ball over the line as he tried to gather his own kick. Then five minutes later, a try in the corner was ruled out for foul play.

Had either try counted, a frantic finale would have followed. However, Oisin McDermott was able to clear

Oisin McDermott was then able to clear the danger with an enormous clearance that ended up in the Carlow 22. From the subsequent lineout, Simon Deevy managed to break free and score under the posts to make the game safe at 21-3.

It was a well-deserved win for the North Meath Athboy team with standout performances all over the park – including strong carries from Andrew Dowds, Padraic McGurl, Theo Chamberlayne Daye and Adam Deighan, robust defence from Michael McNamee, Eanna Finn, Sean Moriaty, Jordan Herring and Kevin Dowds, and tireless work at the breakdown and in the loose from Dennis Cannon, Graham Boland, Jack Yore, Sean Gilsenan and Ben Shine. And all well marshalled by fly half Conor Grey.

The win also shows how far the side has come in one season. Back in September, both Athboy and North Meath faced the prospect of being unable to field a full senior team due to the effects of Covid and the extension to the GAA season.

So the decision was taken to amalgamate the two senior men teams for the season, although the clubs remain as two separate and independent clubs. And despite taking time to find their feet, the players have given everything over the course of the year, culminating in a third place position in the league and Sunday’s win in the Cox Plate.

The club would like to thank Greg Cox of Athy Club for travelling up to the Grange to attend the game and attend the presentation.

The club would also like to thank Carlow for making the trip to North Meath in such good numbers and for playing their part in such an entertaining match. A special mention should also go to the Carlow supporter with the Yorkshire accent who could probably be heard back in Carlow such was his ability to project his voice.

The day was rounded off with a barbecue for the supporters and well deserved refreshments for the players.

A Jenkinson Cup final awaits the team now in what will cap a tremendously successful season for both Athboy and North Meath.

As new season edges closer we are looking for volunteers ...

Meeting tonight to outline all the things the club needs ...

Our AGM will take place tomorrow evening at 8.00 in the I...

Get live information for Club on the ClubZap App